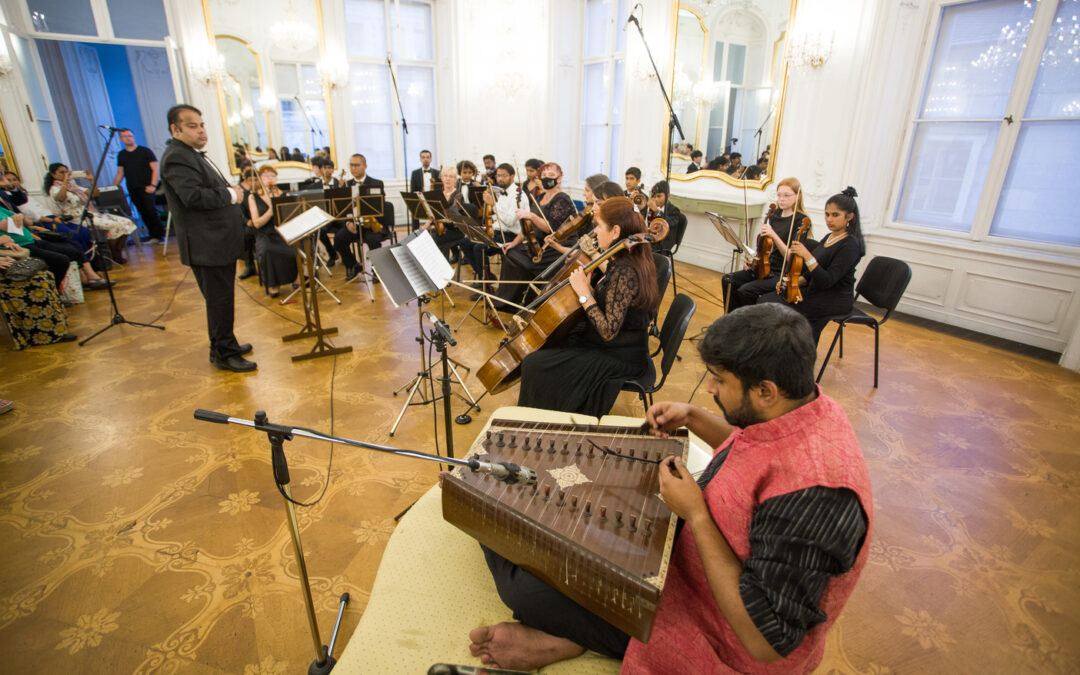 Debanshu Sen has been one of the members of the Indo-European Chamber/Youth Orchestra since the inception of the esteemed orchestra from India. Recently, he was an integral part of the Concert series that took place in Budapest, Hungary on the 13th and 14th of August 2022. IEYO is a chamber orchestra of its own kind and known for its collaboration with Indian instruments. Debanshu a well-known Santoorist from Kolkata, and a student of Ustad Aashish Khan, performed an exclusive set of pieces composed for ‘Santoor and Western Orchestra’ by Michael Makhal in the Budapest concerts. The Raga-based compositions were specifically written/re-arranged for the combined performance of Santoor along with the Western structural orchestra. It is rare to see such compositions and orchestration made for the western audience. The Indian folk and raga based pieces that were performed in the concerts are called Suswagatham, Rain Dance, and Spirit of India – the last one was re-arranged for this particular concert series. Spirit of India is actually a large composition made for a bigger orchestra, it was commissioned to Maestro Makhal by the Scokendia ensemble for Glasgow Cultural 2014 for Commonwealth Games.

IEYO brought together an ensemble of young and advanced musicians from different parts of India, including nationalities of India, Hungary, Australia, South Korea, and the United States for the second edition of the Grand Budapest Concert this year on 14th August 2022 at the prestigious Festetics Palota in Budapest, Hungar. The ensemble consisted of instrumentalists: ‘1st Violin and 2nd Violin sections, Viola, Cello, and Santoor.’

Debanshu Sen started his musical journey at the age of 9 under the guidance of late Pt. Dulal Roy and then moved on to late vidushi Ameena Perrera of the seniya maihar gharana and then to ustad Aashish Khan. Playing his first concert at the age of 12, to date he has performed in cities like Mumbai, Delhi, Kolkata, Hyderabad, Madhya Pradesh etc. He has participated in various important Indian classical music festivals like Behala Classical festival, and Ustad Ali Akbar Khan’s birth anniversary of Maihar, to name a few. He had the pleasure of working with eminent musicians like Deepak Pandit, Raja Pandit, Shaan, Sriradha Bannerjee , Anupama Deshpande, Raja Hassan, etc. He has earlier performed with the Indo-European Orchestra at the Autumn International Music Festival in Hyderabad in 2018 at the Ravindra Bharati Auditorium, and also, collaborated with the Avant Piano Trio from Europe and performed Western classical pieces. After pursuing his Bsc & LLB, he is working as a legal & compliance auditor in a firm and also, continuing his musical journey with flair and proficiency and mesmerizing people with his Santoor performance.

To audition for the Grand Budapest Concert 2023, contact at makhalsymphony@gmail.com